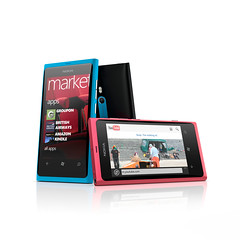 Hi. I’m an Anonymous Android user. Or at least I was up until late 2011, when I had the chance to comfortably convert all of our company devices to Windows Phone-based devices.

For the latter half of 2011 I had been using a Samsung Galaxy S II. It’s a fabulous phone. For starters, the battery lasts for ages – or in this case, two full days of fairly heavy duty work: Email, Wi-Fi, GPS and camera. It syncs everything, has all the possible software I can dream of and the operating system is smooth. Things kind of deteriorated after Google+, but that’s a topic warranting its own post.

Before Samsung I was an avid HTC Desire user, which I kind of accidentally broke. Before Android I used the legacy Windows Mobile-based phones for a few years. Now that I reminisce, they were utterly horrible.

So, we got the opportunity to purchase a stack of Windows Phones from Samsung, the model being Samsung Omnia 7 with Windows Phone 7.5 (Mango). As we already had pre-ordered (and received) a Nokia Lumia 800 and had some experience using the new platform, we pretty much knew what would be in the package.

Over a period of few days, we collected all HTC Desire’s, Samsung Galaxy S 2’s and HTC Desire Z’s and replaced them with brand new Samsung Omnia 7’s. Surprisingly we didn’t get any resistance for the switch. One lucky person got the Nokia Lumia 800. I guess being the first employee in a small company has its perks.

Being a little skeptical towards the “new” platform, I decided to approach Mango with a clean slate, and forgive and forget the horrific history we had together with Windows Mobile 6.1.

Setting up the device is maybe a bit faster as compared to Android: Email settings, Live ID and wireless typically are not that complex to configure, so I was up and running in no more than 3 minutes.

We use Office 365 and on-premises software in a mixed way: Lync Online from the cloud, Exchange from our local datacenter. SharePoint on both. I was anxious to see how Windows Phone would handle the situation:

Surprisingly, everything works well out of the box.

The biggest change was the rapid speed I’m now able to browse all my email in different accounts. With Android, I was semi-forced to use Samsung’s built-in Exchange support, which at times, was very laggy and non-responsive in general. Now I get to use Microsoft’s native client stack, and things work much more smoothly. In fact, I mostly get my email and Lync notifications on my phone and iPad before my laptop or desktop gives me a notification. And they share the wireless most of the time.

Regarding email, here’s an interesting statistic – these are the top 5 user accounts and devices polling email via ActiveSync:

(Note: I’ve cleared the technical details such as user ID’s and Device ID’s for obvious reasons)

The first two accounts on the list belong to me. My iPad 2 syncs email constantly, every day of the week, and it’s really hitting that Exchange CAS server like there’s no tomorrow. The last two accounts belong to someone else, and the device type being WP, it’s one of those new Samsung’s in good use.

After two months of daily use with Windows Phone, there are still a few things I miss from Android that I hope will someday be integrated natively to WP.

The first and foremost: Give me proper multitasking interface

Now I get the occasional “here, see this fancy list of random views, hopefully some of these are the applications you have been using lately”-switch view.

It works poorly, at best.

For example, I know I have Lync Mobile running – how do I switch to that? The list of applications I get when pressing Back-key for a second gives me different email screens, the settings screen and my calendar. Lync is missing.

If I re-open Lync – as expected – it starts again. Okay, I get what I needed but introduces at least 5 second additional wait time just to check if I’m still online.

Second, almost as important as the multitasking interface: Where do I see what’s happening?

With iOS 5 we got the contextual pull-down menu that works everywhere. Android has had this since the beginning of times (or thereabouts). Why do I need it? Let’s say I’m downloading an app from Marketplace but it’s taking several minutes to complete. I switch to check my emails and maybe initiate a quick Lync discussion. Did my app download complete already? Is it installed? For anyone who has used iOS or Android, you instinctively start pulling down the context menu for “things that are happening”.

Zune. iTunes is not the best software in the world but neither is Zune or KIES (from Samsung, for Android). They all simply suck. Luckily Zune supports wireless sync, so that’s a saver.

There’s also the missing who drained my battery-view. I rarely used this on my Android but still, I’m missing that little fellow. Let me know what’s happening inside the device rather than obscure crucial details – like battery level – in a single icon.

Some tiny gripes: Ability to lock vertical/horizontal view. Pinch-to-zoom works incorrectly in Mobile IE, assuming I want a full zoom even if I just want to, you know, zoom a little. Option to update phone without Zune.

None of these are really deal breakers when you think of it. They are convenient utilities and features to help you on a daily basis, and when you get used to them you feel a little less empowered.

Windows Phone finally gives me the chance to create custom apps. I could do that with Android and iOS but since I mostly know C# it now makes more sense to invest some time in that.

Other than that it seems we can finally forget some of the troubleshooting steps we had on Android, and continue business as usual with Windows Phone.